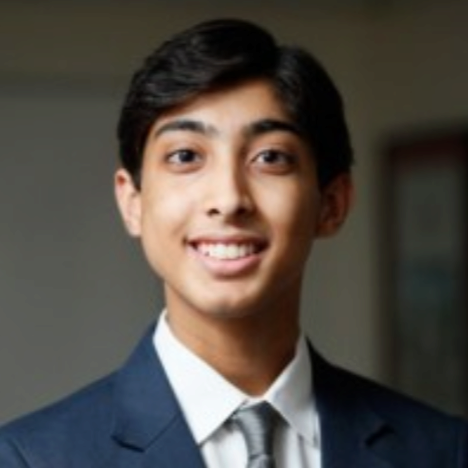 A combination of unique circumstances led Vinay to become a French target in Huntsman: his family moved back to the US after 5 years in France right before he was born, and not being able to understand when his parents and sister talked in French motivated him to learn the language. Vinay’s sister also went to Penn before him and graduated in 2016. The following year, she encouraged him to visit the lounge and he ended up sitting in on HIST107: there, he got to talk to many upperclassmen and decided to apply to Huntsman for the people, a decision that he’s never regretted: “It’s a 100% what I wanted, mainly the personalities.”

Both of his parents are from India, but they lived in France before moving to the US. Vinay is grateful for his family that is extremely open to other cultures and traditions: on top of Hindu holidays, they’ve celebrated Hanukkah and Christmas, and absolutely love France (they have a raclette at home, which is goals). This part of his background might have informed his goal of eventually moving to Southeast Asia in the future, his affinity for the Huntsman community and his decision to wear a Christmas sweater in February.

Vinay has eclectic interests and a strong love for people. Memorizing all the presidents in kindergarten got him into history, particularly economic history. This later led him to develop an interest in finance. He also loves discovering new restaurants in Philadelphia and tries never to go to the same place twice. His ideal day consists of catching up with friends who he hasn’t seen in a while, and what makes him happy is a good conversation that’s playful, humorous and insightful. You can also ask him about the time he was stranded in Paris for a month because of a last-minute Airbnb cancellation when studying at Sciences Po during his Freshman summer, one of the most marking experiences of his time at Penn.

He’s really enjoyed his college experiences thus far, from enjoying the unobstructed view of Philadelphia from the 6th floor of the Perelman center freshman year when KC3 was too hectic, to approaching classes and extracurriculars with the perspective of doing the things he enjoys with people he finds cool: “impromptu is the best way to do college”. One thing he likes about Penn is the balance of academics, pre-professionalism and social life. Everybody takes part in all three, at least to a certain extent, and can understand you no matter what your focus is.

Vinay’s main advice for Freshman is to meet people who are different from them. Even more than simply outside of the Huntsman sphere, that’s people who aren’t interested in global affairs and business. For his part, he has found these relationships by working on seed funding at the Weiss Tech House, where he gets to meet CIS and M&T kids, along with other Penn students interested in start-ups.

In the long term, he hopes to one day move to Singapore and have a close group of family and friends around him. He views the 2010s as being pretty consequential – he moved to Cleveland from the Philadelphia area, finished high-school and started his student career at Penn – he hopes the 2020s will be the same.

We are looking for passionate writers! If you want to interview another fellow Huntsman student or write an article for the Huntsman student blog reach out to any HSAB member or directly to marianav@wharton.upenn.edu