For the past year, my team and I had worked with the High Atlas Foundation (HAF), a Moroccan NGO focusing on sustainable development and environmental protection. As a part of Penn International Impact Consulting (PIIC), we spent two semesters holding weekly meetings and working on the deliverables we were creating for HAF. Then, once finals were complete, we boarded a train to New York, and left for Morocco!

We had multiple deliverables to submit to HAF, and I knew the next few days would be filled with hard work. What I was unprepared for, though, was how enriching and valuable this trip would turn out to be. The High Atlas Foundation has built over 15 tree nurseries across Morocco, which not only provide jobs for rural communities, but provide thousands of seedlings to farmers for a symbolic price. Most of our deliverables revolved around the operations of these nurseries, which meant it was important that we visit them for our work. We visited three 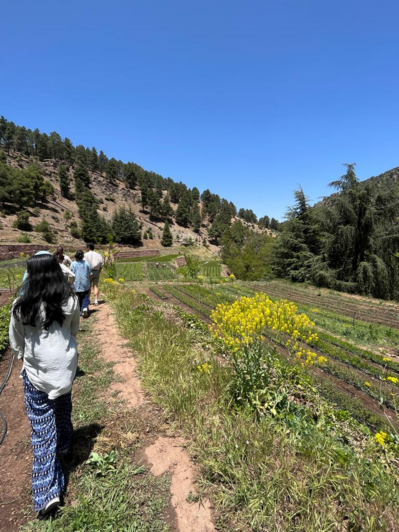 nurseries, and each one was an incredible experience.

The first nursery we visited was located in Akrich, home to one of the few Jewish communities in Morocco. There, we met Abderrahim, the caretaker of the nursery. He told us the story of the Jewish cemetery next to the nursery. His family had taken care of the cemetery for three generations, a volunteer position, and by opening the nursery, HAF created a way for him to hold a job close to the land and earn money. The nursery was also located near an important Jewish religious site, contributing to efforts for religious harmony in Morocco.

The second nursery we went to was located deep in the mountains. In order to get there, our team loaded into a van, and the driver took us on an hour-long journey through the winding mountains of Morocco. The narrow roads were carved into the side of the mountain, and we could see pockets of red rock buildings, nestled into the mountainside. The caretaker of this nursery was an old man who had lived in his village for his entire life, and woke up to the view of the mountains from his bedside.

The final nursery we visited was part of a women’s collective. The women ran the entire nursery and got paid a fair wage, earning the praise of the men who showed us around. They raved about how much the women had improved the nursery’s performance through their careful management and discipline. The women on our team, including myself, had the opportunity to talk to these women and understand their experiences as women looking to empower themselves.

My time in Morocco wasn’t limited to nursery visits, and I learned from every cultural and professional experience. The nursery visits, though, truly captured the best, most authentic parts of life in Morocco, and I know I’ll be back to visit them again.