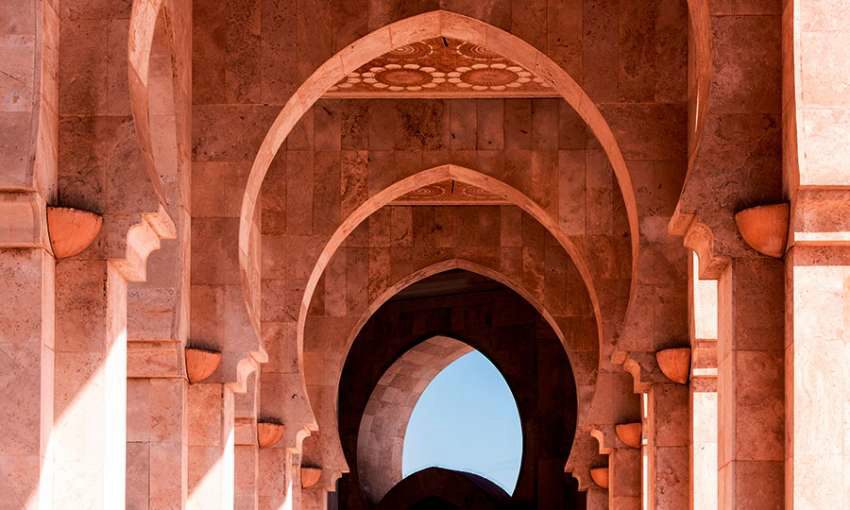 CASABLANCA—Ibtissam remembers the laughter, the music, the henna-stained hands of the women lined up to welcome a newlywed couple in her neighbor’s home in Safi, a city in Western Morocco: “It felt like a party.”

The negafa, a woman who attends to a bride’s needs during a wedding, announced the bride and groom’s arrival into the home—leading the couple into a small bedroom. Soon after, the mother of the bride knocked and entered the bedroom, then paraded out a blood-stained bed sheet. The house burst into a celebration of the new bride’s newly lost virginity.

While the tradition of examining the bed sheet of a newly married couple for blood is mostly concentrated in rural Morocco, the phenomenon of virginity testing is not exclusive to her hometown of Safi, Ibtissam says. The practice transcends region and social class, permeating almost every aspect of Moroccan society. And it often includes physical exams conducted by health professionals who deliver virginity certificates—evidence of a woman’s intact hymen.

Soumaya Guessous, a sociologist and gender scholar at University Hassan II in Casablanca, confirms that the practice of testing for virginity is not limited to a specific socioeconomic strata or region. Medical practitioners all across the country give out virginity certificates, through the practice is concentrated in rural areas as well as more marginalized regions within urban cities. In fact, Imane Hatim, MD, one of the few gynecologists in Casablanca who admits to issuing certificates, points out these disparities within Casablanca, Morocco’s largest metropolitan city. She notes that while it is rare for a patient to request a virginity test at her clinic—Clinique Al Massira—located in a wealthier part of town, it is much more common at her private practice in the “quartier populaire,” which she describes as a more conservative, working-class neighborhood. 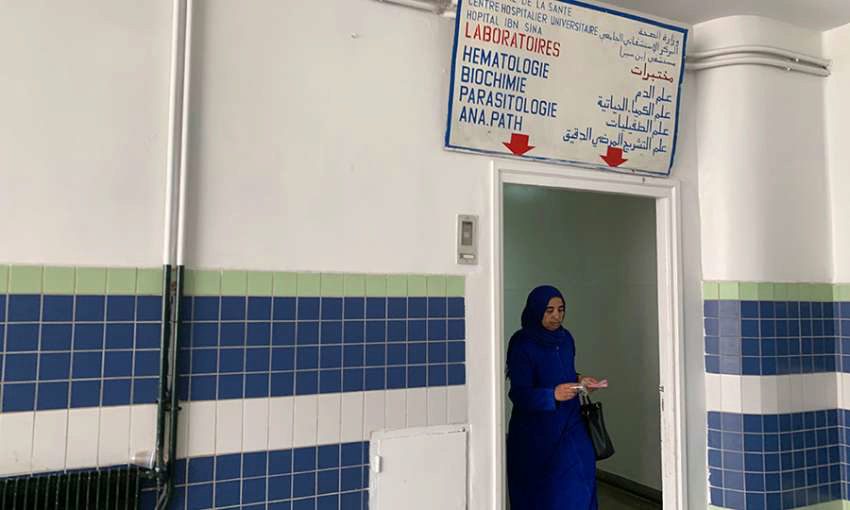 A woman walks out of the hematology laboratory in Hôpital Ibn Sina, a public hospital in Rabat and office of doctor and feminist Asma Lamrabet. Image by Samidha Sane.

Despite the North African country’s desire to portray itself as a modern society, global disparities in women’s health education are especially pronounced in Morocco. Virginity tests are employed to assess the virtue and social value of women and girls, presenting a double standard; males are often lauded for engaging in premarital sex—while females are ostracized.

In October 2018, the UN and the WHO called on several countries—including Morocco—to abolish the practice, condemning it as medically unnecessary, painful, humiliating, and traumatic human rights violation. In response, Moroccan government spokesperson Mustapha El Khalfi stated that the tests are not legally required before marriage. However, he failed to acknowledge that despite not being required legally, virginity tests are still rampant and valued in family, criminal, and legal matters in Moroccan society.

One year after the UN and WHO call to action, feminists and doctors in Morocco have led social awareness campaigns to spur progress. In December 2018, Betty Lachgar, founder of Mouvement Alternatif pour Les Libertés Individuelles, known as MALI—a civil disobedience movement in Morocco—released a statement titled “My Vulva is Mine,” calling for social reform regarding virginity testing. 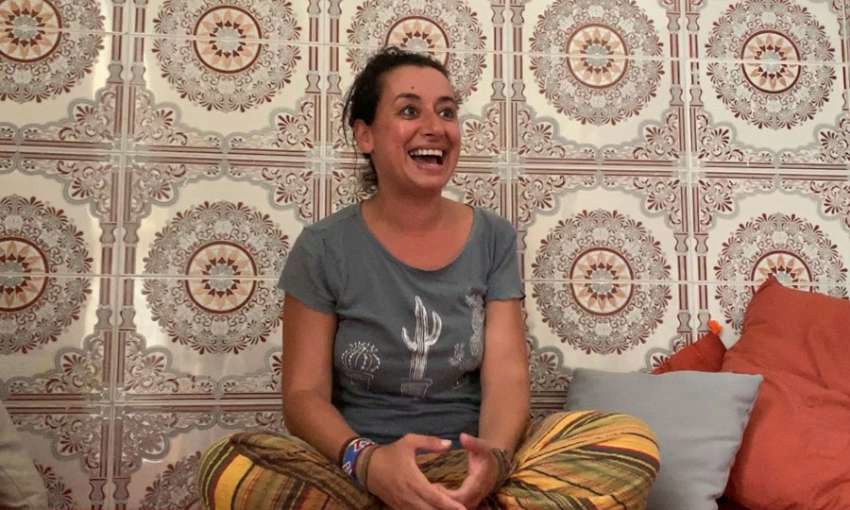 Betty Lachgar, founder of MALI, is calling for social reform and women’s rights in Morocco. She denounces virginity testing as a form of torture and rape. Image by Samidha Sane.

“We accused them [gynecologists] of complicity because it [the virginity test] is a form of torture and rape,” Lachgar said. In response to MALI’s campaign, a group of Moroccan doctors united to denounce the practice.

Proudly, Lachgar said, “We had a little victory…it was the first time that gynecologists talked about this and wrote a release to say they wouldn’t do it [practice the test] anymore.”

Despite these calls for action, Guessous explained that legal change has been slow due to widespread societal and family pressure on a woman to remain a virgin until marriage. Doctors—often covertly—continue to issue the certificate.

Guessous says, “It’s violence for the young girl … when she is put on the exam table, told to spread her legs, penetrated by the doctor’s fingers … and there are women [family members] there [crowding around the exam table] to see if she’s a virgin or not.”

The expectation of virginity isn’t just inherently discriminatory and degrading; it can also lead to violence against women.

The more blood on the bed sheet, “the more the honor of the family is saved,” Guessous said, even though the amount that a woman bleeds or even the fact that she bleeds is medically irrelevant. As a result, grooms are often advised to act violently during intercourse to ensure that their brides bleed their first time having sex. Women are rushed to the emergency room with vaginal tearing and other injuries because of such abuse on their wedding days.

Imane Hatim, MD, is familiar with these stories of trauma, but provides an alternate perspective—that the certificate can shield brides from harm. Hatim advocates for the virginity test as a preventive measure—a way of examining a woman’s hymen and informing her before marriage whether or not she will bleed her first time having sexual intercourse. Hatim recounts stories of women who did not bleed on their wedding day.

Others point to the virginity certificate’s utility in court. One woman (who requested anonymity) had to produce a certificate when requesting an annulment. The judge deduced the terms of the divorce based on whether or not the marriage had been consummated. In this case, the certificate helped the woman win the case and separate from her husband.

At the same time, Moroccan feminist and activist Fedwa Misk, founder of Quandisha, an online magazine for women launched during the Arab Spring, points out this legal provision could be used by newly-wedded grooms to justify annulling their marriages after their wedding on the grounds that the bride was not a virgin, in cases where the bride didn’t have the certificate.

Under the Moroccan Criminal Code, perpetrators receive longer, more severe punishments for raping a virgin than a non-virgin, Misk notes. This inherently implies that the worth of a woman is between her thighs, based on whether or not her hymen is intact. Moreover, it classifies rape as a crime against the honor of a woman’s family as opposed to the integrity of the victim.

“It demonstrates that there is a hierarchy,” Lachgar said. “That there are some victims worse off than others… and that if you’re not a virgin, you’re not losing anything if you get raped.”

Evidently, the system itself is cyclical—the necessity of the virginity test in Moroccan law to determine the fate of young girls in cases of rape and annulment propagates its prevalence in culture and society. At the same time, because of its pervasiveness, legal institutions continue to use it as a valid, decisive factor in court cases, ultimately maintaining its relevance and use.

Across the board, women, doctors, and professionals agree that transforming the culture of citizens and lawmakers alike is the best course to incite change in Morocco. 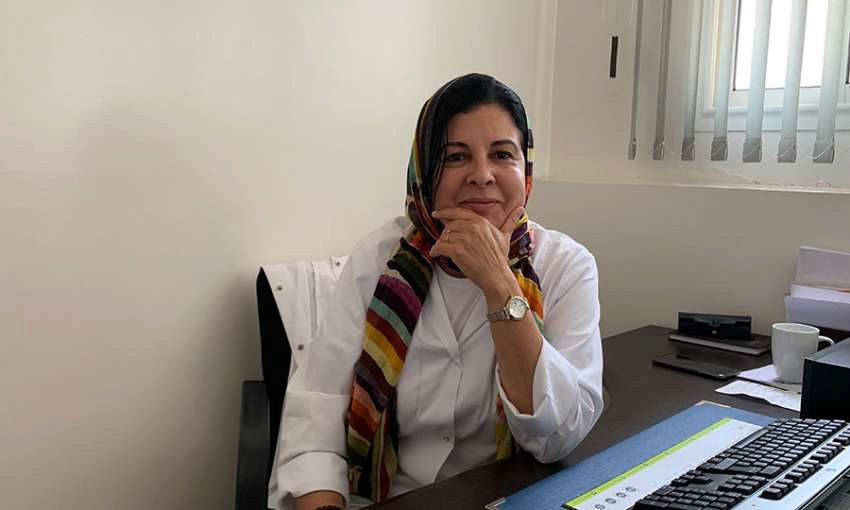 Asma Lamrabet, MD, at her office in Rabat, Morocco, 2019. Image by Samidha Sane.

Asma Lamrabet, MD, medical practitioner and religion scholar in Rabat, hopes to change outlooks towards virginity through her interpretation of the Koran from the “feminist and reformist” approach. “The concept of virginity is not a religious concept…it’s a social and cultural construction,” she says.

This construction, however, has proved difficult to reinvent as it is baked into the fabric of Moroccan society. In order to encourage constructive conversation, Lachgar says that more people—including feminists—must be willing to listen.

“Of course there are feminists who agree with us,” she says, “but there is always a ‘but’ for them … but society… but culture… but religion.”

Misk says education campaigns on women’s health are needed, too.

For some women in marginalized communities, she says, “It (the virginity certificate) makes the bride-to-be feel proud. This is the problem. There’s no real issue for them… it’s seen as a formality now.”

Individuals may not see the tests as an injustice in the cultural context, but rather as a point of social acceptance and ritual. Farah, age 16, from the Souss-Massa region confirms this, saying about the certificate, “It’s normal. Of course I’m going to do it.”

But other young women are starting to refuse the practice. Latifa, age 19, from the same region, explains that while she knows cousins and family friends who have gotten virginity certificates, she personally would not get one. “I would feel like I’m just a body for a boy,” she says.

Housein, age 23, agrees. “I won’t ask my future wife to get the certificate…it’s a problem that our community judges just women and not men.”

Samidha Sane is a sophomore studying Business, International Studies, and French through the Huntsman Program at the University of Pennsylvania. She is one of the 43 chosen International Reporting Student Fellows through the Pulitzer Center’s 2019 Campus Consortium program. Through the support of the Pulitzer Center on Crisis Reporting, Penn Global, the Huntsman Program, and the Penn Middle East Center, Samidha spent 8 weeks over the summer investigating underreported stories from more than seven cities in Morocco.

Asmaa Reznara, a freelance translator and transcriptionist based in Casablanca, Morocco, provided assistance with logistics and translation. She holds a Masters degree in Business and Marketing from ENCG-Settat and has worked with the Gateway Journalism Review and the Women’s Global Education Project in Chicago.